"We were looking at two main things when it came to switching to alternative fuel vehicles,” said Buncombe County Sheriff Van Duncan. “We wanted to boost our bottom line in terms of fuel cost savings, and also to have cleaner-burning cars on the road. Propane autogas was the practical fuel choice because, not only does it support these goals, there also isn’t a noticeable difference in vehicle performance when converting these Crown Victorias from gasoline to propane autogas.”

The County received grant funding under the Program, which is administered by Virginia Clean Cities, for 10 vehicle conversions and the installation of a 1,000-gallon propane autogas fuel tank. The County began switching vehicles to propane autogas in August 2011 and completed the conversions in February 2012. The sheriff’s patrol cars travel an average of almost 25,000 miles each year, and the fleet is using than 17,000 gallons of propane autogas annually. Fleets such as Buncombe County can also take advantage of more fuel savings with the recent extension of the 50-cents-per-gallon federal tax credit for alternative fuel.

According to Sheriff Duncan, the only noticeable change in performance is that the “motor runs a little quieter.” The vehicles were outfitted with versatile bi-fuel Prins VSI autogas system, which allows drivers to switch to gasoline in case the autogas tank runs low out of fuel station range. The fleet can also switch the autogas systems from older vehicles to newer ones with similar engines, without skipping a beat — an added benefit for law enforcement fleets that put a lot of wear-and-tear on their patrol vehicles.

“The ability to switch back to gasoline is a tremendous option for law enforcement fleets,” said Sheriff Duncan. “It’s just one button on the center of the dash and you’re back to running on gasoline. That provides our deputies with peace of mind—to know that in an emergency situation, you not only have a full tank of propane but also a backup full tank of gas, giving you an effective operating range of about 500-600 miles before you have to refill the car.” 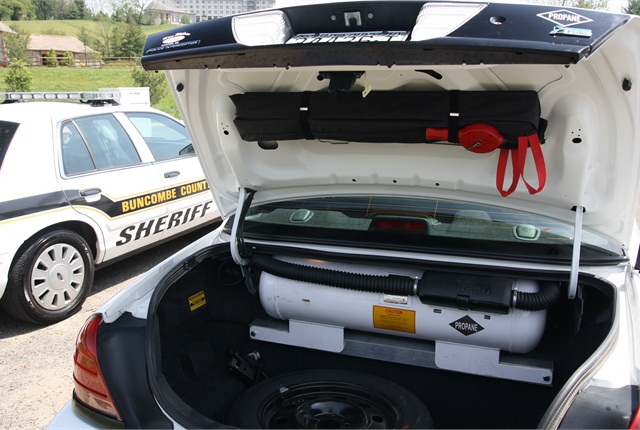 The sheriff’s office has been so pleased with the performance of the propane autogas-powered Crown Victorias, it’s currently looking into obtaining funding for an additional 10 propane autogas vehicle conversions. For his part, Sheriff Duncan is volunteering his vehicle for the next propane autogas conversion. “We’re going to push forward in upgrading our fleet, and I want to do mine next,” he said. “Nothing says you believe in it like taking it on.”

Kia EV6 Travels Across U.S. with Shortest Charging Time for an EV