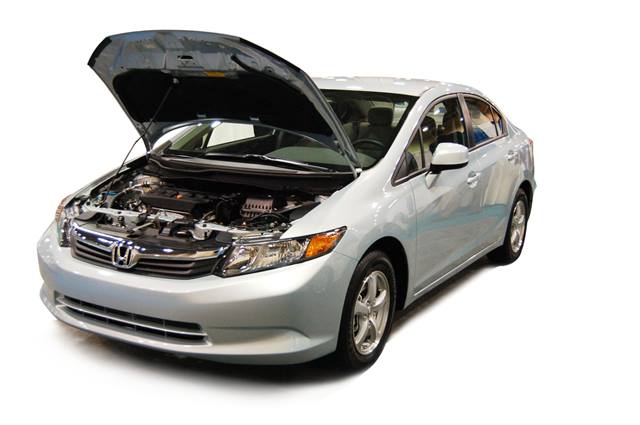 Fourteen years after its debut in 1998, the Honda Civic Natural Gas holds the title as the longest continuous OEM-produced, compressed natural gas (CNG)-powered vehicle in America. And that’s not its only significant stat — it is also the cleanest internal combustion-engine-powered vehicle in the world, according to the U.S. Environmental Protection Agency.

Formerly known as the Civic GX, the fourth-generation model has been rebranded as the Civic Natural Gas to show off its most distinctive feature: the fact that it’s a dedicated CNG vehicle, not a hybrid or bi-fuel vehicle.

"While the GX had some brand/model awareness for a good number of our shoppers, the name change helps them to identify the model and identify with the model," said Eric Rosenberg, assistant manager, alternative fuel vehicle marketing for American Honda Motor Co., Inc.

While the name change helps the Civic Natural Gas stand out among its competition, its production also makes it unique: Honda is the only OEM to build its CNG-powered vehicle on the same assembly line as its gasoline product.

"This is a significant difference, as everyone else builds their vehicles as gasoline units, then ships them off to a CNG upfitter so the CNG-specific equipment can be installed," Rosenberg said. Avoiding the upfitting process is more efficient, in that it avoids several points of transportation, loading, and assembly, and as a result, is more cost effective and ensures quality, too.

One common concern on the part of alt-fuel vehicle buyers is the lack of "convenient" refueling stations. However, the new Civic Natural Gas offers Honda’s integrated navigation system with public CNG stations already populated in the software, easing driver apprehension about fueling.

Service is easier, too. Honda recently added 74 more dealers to its certified network and is now represented in 36 states by a total of 198 dealers — in all, 20 percent of all Honda dealers in America. "By the end of the year, we will have increased our certified dealer network by 58 percent so servicing your Civic Natural Gas will become even easier," Rosenberg said.

The Civic Natural Gas offers durability, lower fuel costs, reduced maintenance costs, and has the same look and appeal of its popular counterpart, the gasoline-powered Civic.

"Buying a Civic Natural Gas gets a fleet out of expensive-to-run trucks and vans when the need really isn’t there," Rosenberg said. "On top of everything else, you get Honda quality, too."

After its debut at the New York Auto Show in April 2011, the Civic Natural Gas saw its second official debut later that year at the Green Fleet Conference, and was well received. "Everyone is always surprised at how roomy the car is," Rosenberg said. "When people think of the Civic, the first thought that comes to mind is it’s a small car or something they had coming out of college. But this new platform is a huge step up in content, size, and prestige."

Rosenberg said the word about the Civic Natural Gas is spreading. "I was very happy with the reception of the Civic, but I was especially pleased by how knowledgeable our guests were," he commented. "Often when we attend green events we spend a good deal of time ‘introducing’ the Civic to individuals for the first time. At this year’s Green Fleet Conference, I met a whole different kind of shopper/attendee and that was especially gratifying."