The eight steps to develop and implement a driver behavior modification program are:

Imagine a fleet program that could reduce fuel consumption in the neighborhood of 40 percent. Such a program would target — for many fleets — the single greatest untapped source for fuel savings: the driver.

According to a recent University of Michigan Transportation Institute study, drivers who practice good eco-friendly habits can realize up to a 45-percent reduction in on-road fuel economy. Other sources, including the U.S. Department of Energy and the American Trucking Associations (ATA), put the savings at 30-35 percent.

The bottom-line value of education and training to change driver fuel-wasting habits is gaining adoption as a component in green fleet strategies, along with capital investments in new vehicle and engine technologies.

“Our industry has invested billions in vehicle fuel-saving technologies with mixed and less-than-stellar results. We’ve addressed the hardware and, to a certain extent, the software of this issue while largely ignoring the largest factor of all: the driver,” Stanton said. “In retrospect, we probably should have started there. Had we started with the drivers by improving their habits, it stands to good reason our technological investments would have paid off more handsomely because our drivers were ‘better. ’ ”

Stanton knows the effectiveness of driver behavior modification efforts. While director of fleet management for Polk County, Fla., he developed an award-winning fuel-savings initiative that included an employee incentive program for eco-driving efforts.

Because every fleet’s needs are different, every fleet’s driver modification program must be organization-specific, advised Craig Neuber, manager of strategic consulting at ARI. Is the program “more about finding ways to increase vehicle mpg and decrease idling? Or is the fleet trying to improve safety and decrease accidents?” he asked.

It’s important, said Neuber, that fleet managers understand how a behavior modification program can help their fleet operations and pinpoint those areas most in need of improvement.

The EDF’s “Fuel-Smart Driving Handbook” suggests “a successful driver education program should focus on a few factors that drivers can control and have the most impact on fuel economy.”

The EDF handbook identifies these driver-controllable, high-impact factors as minimizing idling, avoiding aggressive driving behaviors, and maintaining vehicles properly. Asking drivers to make a limited number of straightforward changes is often more effective in changing behavior than “overwhelming them with a large number of requests,” according to the guide.

Setting goals helps determine a program’s direction, required resources, components, and measures, said Stanton of Hillsborough County. “What’s important is your goals be specific, measurable, and realistic,” advised the EDF. Initial goals can be modest, then built upon incrementally as they are achieved. 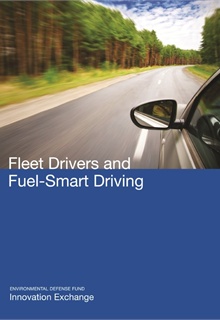 Senior management must clearly accept and endorse the program, according to Stanton. Gaining this essential backing, he said, is “all about the money.” Emphasize the program’s impact on bottom-line savings in lower fuel costs through specific actions such as cutting mpg and reducing vehicle idling, Stanton recommended.

The environment-conscious program also can be linked to corporate responsibility goals or tied into the company’s participation in such programs as the Environmental Protection Agency’s (EPA) SmartWay program, Stanton added.

Seek other company or agency department buy-in and support, said Neuber of ARI. “This can include human resources, and an environmental, health, and safety department if the organization has one. Getting their support can save backtracking and help with launching the program successfully,” he explained. “A successful program needs ongoing support and attention to keep it fresh and credible.”

The first step in developing and implementing a driver training program is outlining a comprehensive fleet policy, according to Elisa Durand, assistant manager, strategic consulting − environmental & fuel strategies at ARI. “A fleet policy informs drivers of rules and regulations they need to follow and lays the foundation for what they will learn in the training program,” she said.

A wide range of resources are available to custom-design a driver behavior modification program. A number of effective training methods, from online quizzes to in-person classes, are available, said Durand. “These program tools are most effective when used on an on-going, consistent basis. This repetition will foster a culture in which good driving habits are encouraged,” she added.

Bridgestone Tires, for example, offers a free video entitled, “What Drivers Can Do to Save Fuel.” The DVD explores fuel-saving benefits for drivers, tips to cut fuel use before a trip starts, the importance of idle control, time management influence on fuel consumption, and the cost of excessive speed.

Driver program suggestions and tips also can be found on websites including, but not limited to:

Avoid “canned” programs, said Stanton. “Canned versions have a generic logo, a generic message, etc.,” he pointed out. “Drivers can brush it off as not necessarily germane to what they do or their job. If the program is presented with a personalized message regarding the specific fleet, that makes a difference. The message is then ‘This is about my fleet, my company,’ ”

He collaborated with Ford Motor Company to adapt and customize the automaker’s “Driving Skills for Life” program with his fleet’s data on mpg, idling, etc. “When the program talks about stats ‘from your vehicle,’ it makes the effort personal and relevant to drivers,” he said.

Stanton also advised, “Program elements should be simple, easy to explain and adopt, and understandable. The more complex, the less likely [the program] will succeed.”

“It’s important all parties involved understand the value and benefits of a driver behavior modification program. That includes everyone from senior level management to drivers,” said ARI’s Iannuzzi.

He encouraged fleet managers “to use every channel available to engage key stake holders at every level, including meetings, discussions, e-mails, and newsletters.”

The EDF handbook also recommends communicating with drivers through channels they already utilize. The guide suggests fleet managers launch the program in a group setting, e.g., an annual meeting, safety seminar, or regional sales meeting, to convey the program’s importance and the entire company’s support.

“At a minimum,” the handbook states, “Launch your program via a special announcement from senior management or other credible leaders within your organization.”

Use the company or agency Intranet site to deliver driver education messages, including regularly posted tips, reminders, and interesting, relevant facts. Other tips suggested in the EDF handbook include:

Measuring and tracking the program’s progress and success is essential to allow setting goals, demonstrating results, and maintaining driver interest and attention.

Measure quantifiable elements, such as mpg, idling times, and preventable accident rates. Start with an initial measure and track  it quarterly, bi-annually, or annually.

“Actual company or agency history is a better measure,” said Stanton of Hillsborough County. “There must be a way to measure individual driver results. Benchmark each driver — where they are today and against the goal, then track progress.”

Durand of ARI recommended monitoring results of more than one measure and avoiding tracking one driver against another. “Rather,” she said, “the best benchmark is the driver’s own previous results and the improvements he or she has been able to make post-training.”

She also cautions reporting data results “in a proper context.”

“Are some drivers continually underperforming or having trouble? If so, those individuals may need additional training to maximize the fleet’s overall performance. Conversely, if the fleet is outperforming its goals on a consistent basis, the expectations may need to be raised,” she explained.

According to the EDF, drivers should be clear on what is measured and how often, with opportunities to provide feedback. “It is important drivers believe that program metrics and reporting intervals are fundamentally fair,” notes the EDF handbook.

Stanton advised against agency peer benchmarking among public sector fleets. “In government fleets, it’s difficult to measure against one another. There are too many variables — customers served, geographic boundaries, terrain, etc.”

Likewise, he noted, commercial fleets should benchmark their program progress and results only against fleets very similar in type and function.

Incentives are critical to driver buy-in, according to Stanton of Hillsborough County. “Peer pressure is a powerful weapon. Include rewards and penalties in the program. Some drivers won’t ever be concerned, but most are,” he observed.

The EDF advises that incentives should be “meaningful enough to influence drivers, but not so substantial as to incite gaming.” Suggested rewards include cash, retail and restaurant gift certificates, or items that help improve “life on the road,” such as a free oil change for personal vehicles.

Reward all drivers who achieve and sustain significant results, rather than a few star performers, according to the EDF. Consider offering special recognition or small prizes for a few standouts every quarter.

Some best practices fleet managers can use include: