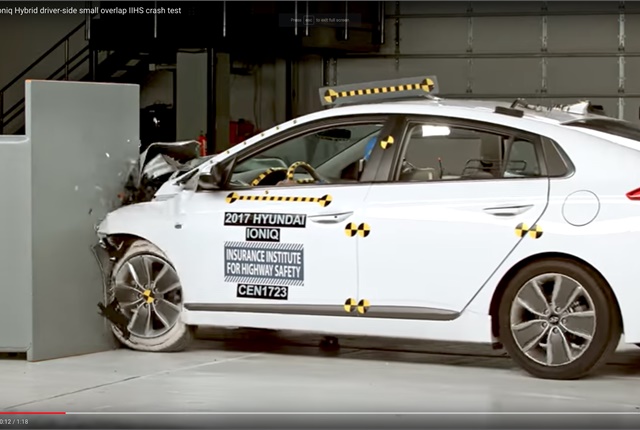 The Hyundai Ioniq Hybrid, a new small car, is one of the three latest vehicles from Hyundai to earn the 2017 Top Safety Pick+ award from the Insurance Institute for Highway Safety.

The other two are the redesigned Elantra GT, another small car, and the Santa Fe Sport, a mid-size SUV, according to IIHS.

To qualify for the award, a vehicle must garner the highest available rating of “good” in all five IIHS crashworthiness test categories — small overlap front, moderate overlap front, side, roof strength and head restraints. The vehicle also must draw a rating of “advanced” or “superior” for front crash prevention and a rating of “acceptable” or “good” for headlights.

The three vehicles qualify when equipped with optional front crash prevention and specific headlights, IIHS said. The optional front crash prevention system earned a rating of “superior.” All three vehicles avoided collisions in the 12 mph IIHS track test. In the 25 mph track test, the Ioniq Hybrid and the Santa Fe Sport both avoided a collision. The Elantra GT's impact speed was reduced by 22 mph.

The 2017 Ioniq Hybrid's high-intensity discharge (HID) headlights, which come with the Limited trim on vehicles built after May 2017, scored a rating of “acceptable.” Most of the other headlight variants drew a rating of “poor,” though IIHS said it hasn’t yet had the opportunity to test the car’s optional curve-adaptive HID lights built after May.

The 2018 Elantra GT’s best available headlights also drew a rating of “acceptable.” They are optional LED headlights with high-beam assist, a feature that automatically switches between high beams and low beams — depending on the presence of other vehicles. Without the feature, the LED headlights attracted a rating of “marginal.” The base halogen headlights were rated “poor.”

The 2018 Santa Fe Sport’s optional curve-adaptive headlights with high-beam assist on vehicles built after June 2017 were rated as “good.” IIHS rated other headlight variants as “acceptable” or “poor.”

With these three vehicles, a total of seven models from the Hyundai brand qualify for the 2017 Top Safety Pick+ award.