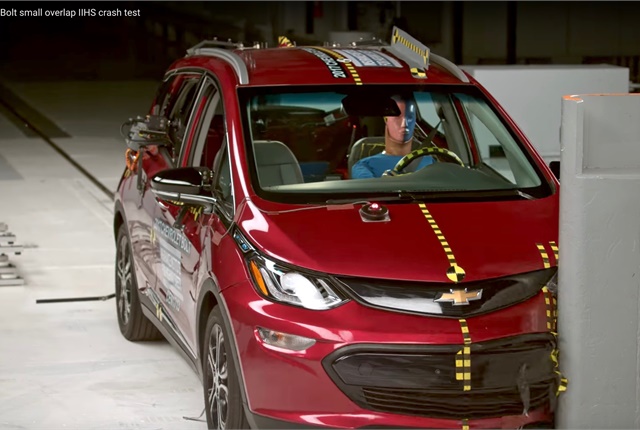 The 2017-model year Chevrolet Bolt is a Top Safety Pick Award winner and the first all-electric vehicle to earn a 2017 award from the Insurance Institute for Highway Safety, the institute said.

The small car is new for the 2017 model year. Unlike the Chevrolet Volt, it has no back-up gas engine.

The car also has an optional front crash prevention system that drew a rating of “superior.” The Bolt avoided collisions in IIHS track tests at 12 mph and 25 mph, and the system has a forward collision-warning component that meets criteria from the National Highway Traffic Safety Administration.

To earn an IIHS Top Safety Pick award, a vehicle must have a rating of “good” in all five crashworthiness tests and an available front crash prevention system with a “superior” or “advanced” rating. Vehicles that meet those criteria and also have headlights garnering a “good” or “acceptable” rating earn the Top Safety Pick+ award.

The Bolt is available only with headlights that drew a “poor” rating from IIHS. They provide fair to good visibility but produce excessive glare for oncoming drivers, the institute said.