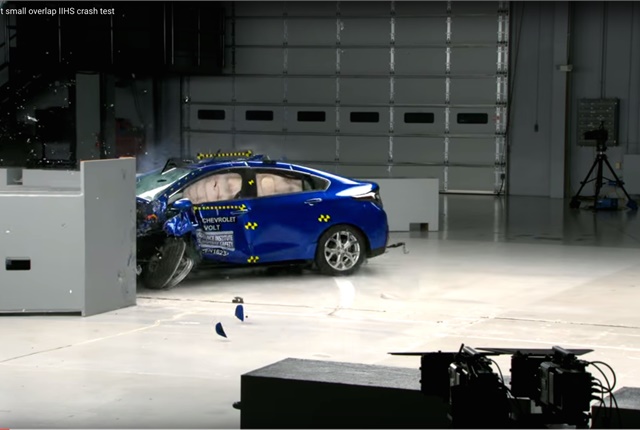 The 2017 model-year Chevrolet Volt has qualified for Top Safety Pick+, the highest award from the Insurance Institute for Highway Safety.

The Volt, a plug-in gasoline-electric hybrid, was redesigned for the 2016 model year. The 2016 model wasn’t tested, but IIHS evaluated the 2017 model as part of a testing program for electric vehicles. Results for the other vehicles will be released at a later date, IIHS said.

The Volt earned across-the-board ratings of “good” – the highest score -- for crashworthiness. The car’s performance in the small overlap front test represented an improvement over that of the previous generation of Volt, which drew an “acceptable” rating. The new version had less intrusion into the occupant space, IIHS said. (To view video footage of the small overlap crash test, click on the photo or link below the headline.)

When equipped with the low-speed system only, the car avoided a collision at 12 mph. Additionally, the Volt’s impact speed dropped by 5 mph in the 25 mph test, according to the institute. The low-speed system also got credit for the warning function and earned an “advanced” rating.

To qualify for the 2016 Top Safety Pick+ award, a vehicle must earn “good” ratings in the small overlap front, moderate overlap front, side, roof strength, and head restraint tests. The vehicle also must have an available front crash prevention system that earns an “advanced” or “superior” rating.

For 2017, vehicles also will need “good” or “acceptable” headlights to qualify for the award. The Volt's standard headlights earned an “acceptable” rating. When equipped with optional high beam assist, which automatically switches between high beams and low beams based on the presence of other vehicles, the headlight rating improved to “good.”