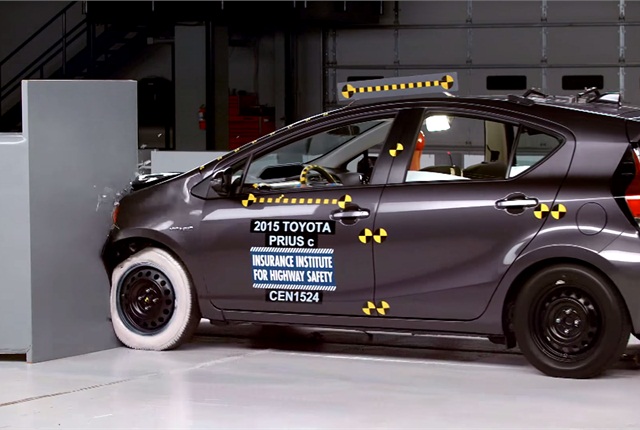 Toyota’s mid-year structural improvements to the 2015 model-year Toyota Prius c have paid off, with the subcompact hybrid car qualifying as an Insurance Institute for Highway Safety Top Safety Pick.

The vehicle lifted its rating in the challenging IIHS small overlap front crash test from “poor” to “acceptable,” thanks to Toyota’s structural improvements to the car’s front end and occupant compartment. Additionally, the automaker lengthened the side curtain air bags. The changes are found in Prius c models built after May.

When IIHS put the modified Prius c through the small overlap test, the driver space was “maintained reasonably well,” IIHS said. “Maximum intrusion was 9 inches at the lower door-hinge pillar, compared with 12 inches in the test of the earlier, poor-rated version. Upper intrusion also fell by 3 inches.”

To view footage of the small overlap front crash test, click on the photo or link below the headline.

The “acceptable” score in the small overlap front crash test takes into account some issues with the vehicle’s safety belts and air bags, IIHS noted. There’s still room for improvement.

“The dummy's head barely contacted the frontal airbag before sliding off the left side,” IIHS said. The safety belt allowed the dummy's head and torso to move too far forward, and the head hit the instrument panel. The driver’s seat also tipped forward and toward the B-pillar.”

On the other hand, the side curtain air bag deployed and, in contrast to the earlier model, had sufficient forward coverage to protect the head from contact with the side structure and outside objects, IIHS pointed out.

Measures taken from the dummy indicated that injuries to the left lower leg would be possible in a crash of this severity. But the risk of other significant injuries is low, IIHS said.

Since the small overlap test was added to the institute’s awards criteria in 2013, IIHS has allowed vehicles to qualify with an “acceptable” rating in order to put awards within reach of more models. But starting in 2016, a “good” small overlap rating will be required.

“Vehicles with an acceptable rating such as the Prius c will need further improvements if their manufacturers want to hold on to the honors,” IIHS said.