More than 600 fleet managers and fleet stakeholders invested in fleet sustainability took part at this year’s Green Fleet Conference in Phoenix, which was held October 1-2 at the Phoenix Convention Center.

View a photo gallery of the event here.

Feedback from attendees was enthusiastic for both the conference and the events surrounding it, particularly the perennial favorite, the Ride & Drive Event, which is held the opening morning of the conference.

"I think it is the finest experience I have ever had at a conference.  Everything is extremely well organized, the Ride & Drive was excellent," said Steve Neil of Cox Communications. "The little touches around the Ride & Drive like lemonade, Segways, and sno cones, just made it a very professionally rewarding and pleasant morning."

This year an entire city street was shut down in downtown Phoenix to allow the more than 500 participants to drive from a choice of 19 different vehicles from most of the major vehicle manufacturers. Taken together, these manufacturers and providers offered a full complement of alt-fuel vehicles available to fleets, including diesel, CNG, hybrid-electric, and pure electric-powered vehicles.

An estimated 400-plus test drives of the vehicles occurred during the 2 ½ hour event. Conference attendees who performed the most test drives were also recognized: After every fourth drive, attendees could enter for a chance to win the frequent test driver prize. The winner received a $500 gift card.

In addition to serious test driving, there was a bit of fun as well. Attendees also had the opportunity to engage in some friendly competition with a series of head-to-head races. This year’s vehicle of choice was the Segway. After some stiff competition, Jeffrey Horioka of Clean Energy took home the laurel wreath, in this case, a $100 gift card, and bragging rights.

The conference was kicked off earlier that morning by Keynote Speaker Kipp Coddington of Washington, D.C., law firm Kazmarek Mowrey Cloud Laseter, with the timely topic of “What Should You Expect in President Obama’s Second Term?” 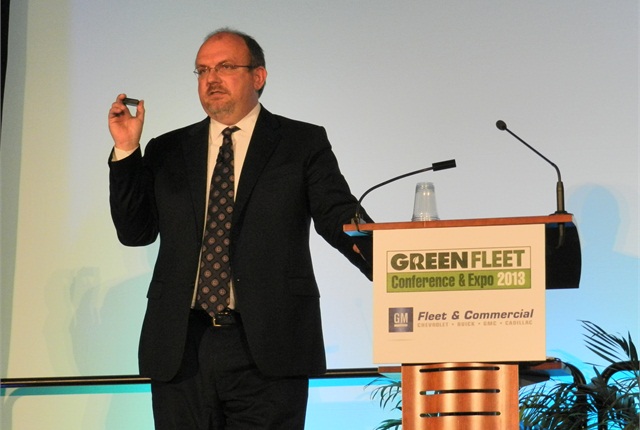 ording to Coddington, in a word is “gridlock,” a connection made even more relevant due to that morning’s shutdown of the federal government. The effect on the fleet managers seeking sustainable solutions for their fleets will be mixed, according to Coddington, with some government incentives and monies likely to dry up and others — such as air quality regulations — set in stone. Coddington predicted that there will be a trend toward greater regulation for green vehicles. He also noted that sustainability is not dependent on government regulation. “If you look at the sustainability policies that the Fortune 500 companies have, most of them have aspirational goals about greening their transportation systems,” he said, citing Wal-Mart as an example. “It doesn’t matter what the government does.”

Other general sessions included “Five Practical Ways to Improve Sustainability Efforts,” “How the Clean Cities Program Can Benefit Your Fleet,” and “Latest Opportunities for DOE and EPA Grants and Funding.”

Concurrent session were organized around several learning tracks—including the first-ever heavy-duty truck track—attendees had the opportunity to drill down into the nuts and bolts of reducing idling, how to implement electric vehicles into a fleet, and getting the lowdown on the new green trucks being introduced on the market, including Chevrolet and GMC’s announcement of the all-new Silverado and Sierra bi-fuel compressed natural gas (CNG) trucks.