On the way to the Colorado Clean Cities annual meeting, the City of Loveland, Colo.’s Fleet Manager, Steve Kibler, participated in the organization’s Alternative Fuel Vehicle Driving Experience, driving the Nissan LEAF to the meeting and recording his experiences. Kibler wrote a humorous, detailed account of his trip, which we’ve posted below, along with photos from the journey.

Boldly go Where No Man [or Woman] Has Gone Before!

Even Captain James T. Kirk, from the original Star Trek television series, was little nervous when traveling to a faraway galaxy. How are we going to prove people’s range anxiety about plug-in electric vehicles is unfounded unless we trust the infrastructure and “Engage?”

The City of Loveland purchased two Nissan LEAFs in 2012, three in 2013, and the City plans to purchase three more in 2014. In the 10 months since we’ve owned and operated them, electric vehicle charging station infrastructure has been growing steadily. We are extremely happy with the electric vehicle’s performance but before today, we never had the courage to travel further than 35 miles one way of the 105 mile maximum distance a LEAF was rated to be able to travel.

When Colorado Clean Cities announced that its annual meeting would be held at the National Renewable Energy Lab (NREL) in Golden, Colo., I Googled the distance between Loveland and NREL It was 60 miles. “Uh Oh… the dilithium crystals may need recharging before engaging the warp drive home,” I thought.

Editor's Note: For those readers unfamiliar with Star Trek, the Nissan LEAF doesn't have any "dilithium crystals" in it. This is a reference to a fictional power source from the Star Trek television series.

I immediately went to the Department of Energy’s website to see if NREL was listed in the EV charger infrastructure. (If anyone had EV chargers it should be NREL - right?) Guess what, of the 6,218 EV charging sites registered NREL’s weren’t listed. So I called NREL, and they do have several level 2 EV chargers, but since they’re a federal facility, by law, they can’t sell electricity to the public. However, if I signed a waiver, they would allow me to recharge our little green shuttlecraft.

As the meeting day approached, I made sure the LEAF was fully charged and checked the weather to make sure we weren’t expecting a winter cold-snap that would necessitate the use of heated steering wheel or heated seats. All looked good, and we decided to commit to our 125-mile mission with a single charge range of 105 miles. Just in-case, my helmsman Gus “Zulu” Brown and I had comfortable shoes – and a credit card.

Most people don’t realize how efficient the regenerative braking is. If you can plan your route to include town stop-and-go driving, you will increase your net efficiency. If you take interstate and use the cruise control, you are less efficient and burn miles at about a 60 percent efficiency rate. We elected to drive highway 287 from Loveland through Longmont, Broomfield, and Arvada and then take I-70 to NREL. 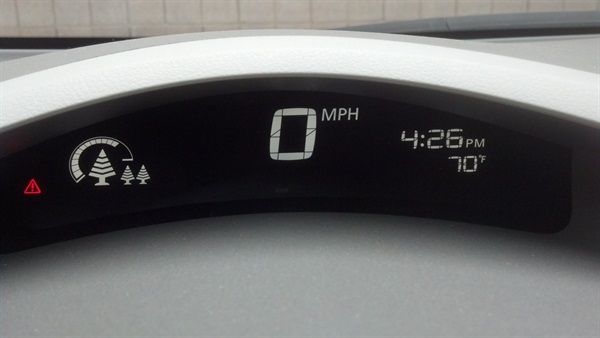 Next week, we'll post the next write-up from the Alternative Fuel Driving Experience.