The U.S. Department of Energy recently launched eGallon, a quick way for consumers to compare how much it costs to drive an EV the same distance you could go on a gallon of unleaded gasoline in a similar car. For example, today’s national average eGallon price is set at $1.14, compared to $3.65.

On Energy.gov/eGallon, consumers can see the latest eGallon price for their state and compare it to the price of gasoline. The comparison is made by calculating how much it would cost to drive an electric vehicle the same distance as a similar conventional vehicle could travel on a gallon of gasoline, according to the Energy Department.

“Consumers can see gasoline prices posted at the corner gas station, but are left in the dark on the cost of fueling an electric vehicle,” says Energy Secretary Ernest Moniz. 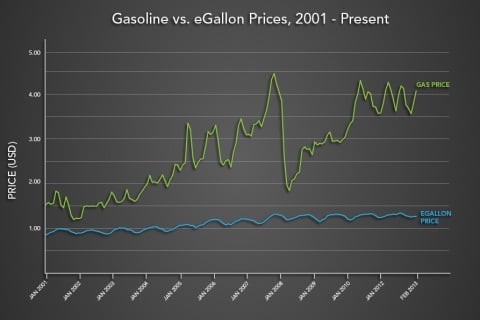