Volvo Trucks became the first North American manufacturer to announce plans to utilize a new, clean-burning alternative fuel to power its heavy-duty trucks. Dimethyl ether (DME) is a non-toxic, non-carcinogenic fuel that can be made from a variety of domestic, sustainable feedstocks and is currently used as a propellant in many household and cosmetic products. The announcement was made at the California State Capitol. 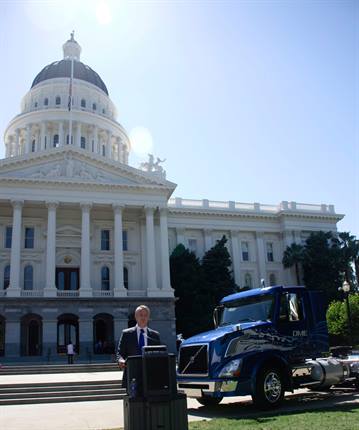 Volvo invested in the DME technology for the North American market because of the benefits DME offers as an alternative to diesel fuel. DME mirrors the performance qualities and energy efficiency of diesel, but exceeds diesel in environmental areas, such as not producing soot. The company plans to commercialize DME-powered vehicles in 2015.

DME can be made from a variety of organic sources, including biogas from food and animal waste, wastewater treatment facilities, and landfills, according to Volvo Trucks. When produced from biomass or biogas, DME can reduce CO2 by up to 95 percent compared to diesel, according to the Department of Energy.

In 2007, Volvo showcased seven commercial vehicles powered by seven different CO2-neutral fuels, one of which was DME in Brussels. The company demonstrated these vehicles in U.S. operation in 2008, in conjunction with the Washington International Renewable Energy Conference (WIREC).

Volvo's DME technology will be available in a Volvo D13 engine.