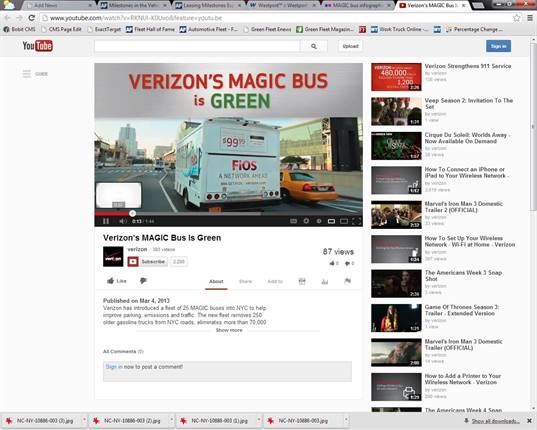 Video of Verizon's MAGIC bus is available on YouTube.

To help reduce traffic congestion and carbon dioxide emissions in New York City, and better serve customers, Verizon has rolled out a fleet of 25 buses that will pick up company technicians at central locations throughout the city and then transport them to local job sites, according to the company.

The fleet, known as MAGIC (which stands for Mobile Area Garage Installation Center) removes approximately 250 Verizon trucks from the city’s roads and frees up the same number of parking spots. The MAGIC buses, each of which can hold up to 12 technicians, do not need to be parked on city streets -- unlike Verizon’s traditional work vehicles, which technicians drive from job location to job location and park at each one while they are at work.

The MAGIC fleet will thus help ease traffic congestion, since roughly 30 percent of city traffic is caused by drivers searching for parking spots, according to the “2012 Emerging Trends in Parking report” by the International Parking Institute. In addition, by eliminating the need for technicians to spend time searching for available parking spots, Verizon aims to provide more efficient customer service in the city.

“The MAGIC bus system is an innovative program that underscores Verizon's long-standing commitment to sustainability,” said Marcia Bystryn, president of the New York League of Conservation Voters. “This initiative will help get vehicles off the road while reducing energy use and lowering harmful emissions. We hope Verizon's example will also inspire other corporations to seek innovative solutions that will green their vehicle fleets and operations.”

James Gowen, chief sustainability officer of Verizon, said: “We took an innovative approach to design vehicles that would not only be greener, but would also help us serve our customers more efficiently while reducing traffic and CO2 emissions in New York City. To curb greenhouse emissions and reduce gasoline consumption, two of the MAGIC buses were designed to be fueled by compressed natural gas, and also have plug-in electric systems.”

Overall, replacing older Verizon trucks with the more fuel-efficient MAGIC fleet program will save the company more than 70,000 gallons of gasoline yearly, according to the company statement. The MAGIC fleet will also reduce CO2 by more than 645 metric tons, which is equivalent to the weight of 200 passenger vehicles.

Last month, Verizon became one of the first companies to partner with the Department of Energy in the EV Everywhere Workplace Charging Challenge, and revealed its new electric work van, developed in conjunction with VIA Motors, at the Detroit Automotive Show. The electric vans will be tested and utilized in New York and New Jersey.

Over the past four years, Verizon implemented a myriad of solutions to reduce the carbon footprint of its fleet, including vehicle technologies such as all-electric, hybrids and alternative fuel vehicles, and processes such as improved routing, reduced idling, and improved tire-efficiency and pressure-monitoring.

Verizon was ranked as the third largest commercial fleet in the U.S. in 2012.