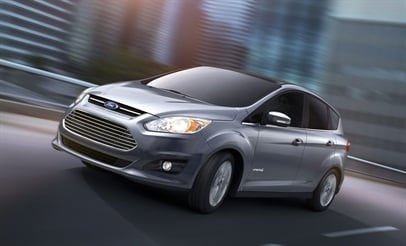 DEARBORN, MI – Ford announced retail pricing for its new C-MAX Hybrid compact hybrid utility vehicle, at $25,995, and that dealers are beginning to place orders for the vehicles. The company hasn’t yet announced pricing for the plug-in hybrid in the line, the C-MAX Energi.

C-MAX Hybrid uses an all-new 2.0L Atkinson-cycle four-cylinder engine and an electric motor powered by a li-ion battery pack. The automaker hasn’t announced official fuel economy figures for this vehicle yet, but said that the C-MAX Hybrid will be part of its lineup of vehicles that get better than 40 mpg.

When it comes to electronics, the C-MAX Hybrid features the latest version of MyFord Touch and the next generation of Ford’s SmartGauge with EcoGuide technology, which is designed to help drivers see instantaneous fuel-economy performance numbers on the left instrument cluster. That cluster also shows Brake Coach, a feature that is designed to help drivers optimize how they use the braking system to get the most out of the regenerative braking system that helps charge the battery.

Ford is building the C-MAX Hybrid at Ford’s Wayne, Mich.-based Michigan Assembly Plant, where the Focus, Focus Electric, and Focus ST are built.