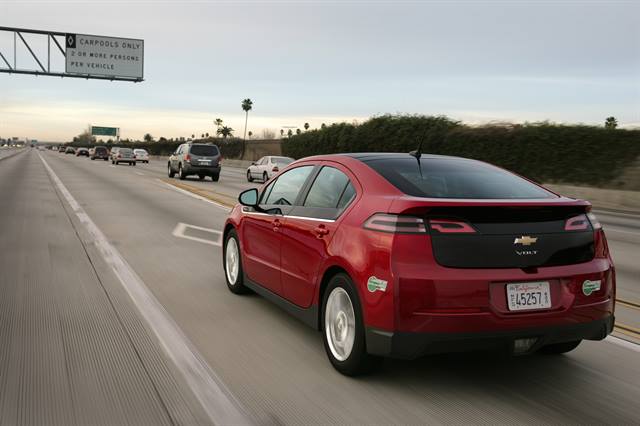 LOS ANGELES – A low-emission model of the 2012 Chevrolet Volt electric car is now available in California, where customers will be allowed to drive solo in the state’s carpool lanes and qualify for a $1,500 state rebate.

Volts with the Low Emissions Package, which is standard for California, began shipping from the General Motors Detroit-Hamtramck plant last week, scheduled to arrive at more than 140 participating Chevrolet dealerships in California by the end of February.

“The Volts with the Low Emissions Package are certain to be a strong draw for California commuters looking to travel the state’s notoriously congested freeways in the carpool lane,” said Chris Perry, vice president of Chevrolet Marketing.

California has more than 1,400 miles of High Occupancy Vehicle lanes. Originally restricted to vehicles with two or more occupants to help minimize congestion, the lanes are now open to single occupancy use by owners of advanced, low-emission vehicles.

The California Department of Motor Vehicles is making 40,000 Clean Air stickers available for registered vehicles that meet the state’s emissions standards. Applications can be downloaded from the DMV’s web site at www.dmv.ca.gov

Additionally, the new Low Emissions Package makes the 2012 Volt eligible for owners and lessees to receive up to $1,500 in state rebates through the Clean Vehicle Rebate Project. This incentive is in addition to a federal tax credit of up to $7,500. Applications can be submitted online at www.energycenter.org.